Our research focuses on the complex host-virus interactions that result in viral persistence. Herpesviruses are extraordinary for their ability to coexist with their host by establishing life-long latent infections. During latency, viral genomes are maintained in the absence of virus production; however, the virus retains the ability reactivate its replication in response to stress or immune deficiency or other host cues. Our laboratory studies cytomegalovirus or CMV, one of the eight human herpesviruses.

CMV is remarkable in that it persists latently in 60-99% of the population worldwide, generally in the absence of disease in the healthy host. Reactivation of CMV from latency poses life-threatening disease risks in immunocompromised individuals, including transplant, AIDS and cancer patients. CMV infection is also the leading cause of infectious disease-related birth defects, affecting 1 in 150 live births in the US. The health cost of latent coexistence of CMV is just beginning to emerge in an association to age-related pathologies including atherosclerosis, immune dysfunction and frailty. The key to eradicating CMV lies in understanding latency in order to ultimately develop novel antiviral strategies targeting latently infected cells.

The overeaching goal of our research is to define the molecular basis of persistence by defining viral and host determinants important to viral persistence and the mechanisms by which these determinants function in relevant cell models. We take genetic approaches to identify viral genes important to latency and then the host pathways targeted by these viral factors. This approach allows us to define the viral factors regulating entry into and exit from latency, as well as defining host processes that the virus has evolved to control. In this way, the virus is an important tool that often reveals interesting and novel cell biology. These approaches have led the lab to focus on CMV manipulation and regulation of host trafficking and signaling and how this regulation feeds back to impact viral gene expression.

• Host signaling. We have identified antagonistic functions of two viral proteins, UL138 and UL135.  UL138 suppresses virus replication for latency, whereas UL135 is critical for overcoming the virus-imposed restriction to replication for reactivation. Both UL135 and UL138 interact with epidermal growth factor receptor (EGFR), but with opposing effects. UL135 targets EGFR for degradation, whereas UL138 recycles EGFR back to the cell surface where it can continue to signal. EGFR is a major regulator of signaling in the host cell controlling cell survival, differentiation, proliferation, and, as such, represents an important host control point for the virus.  HCMV-mediated manipulation of EGFR trafficking and signaling is an important mechanism regulating entry into and exit from latency. 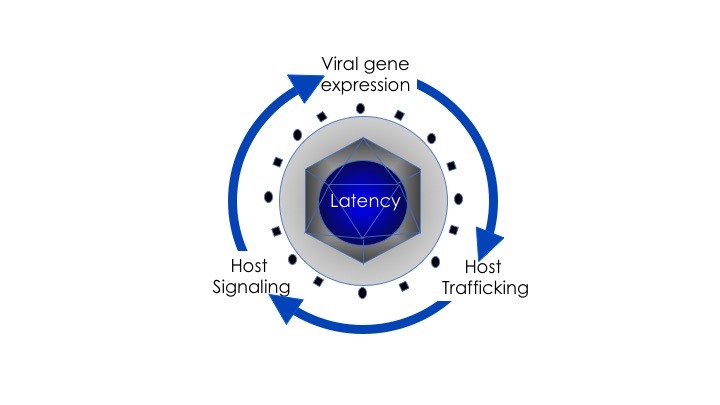