Experiments focused on the APC/Min strain in mice lead to important functional studies of the Wnt antagonist Dickkopf-1 (DKK1).  Studies showed that there are novel functions of DKK1 and DKK2 that utilize novel signaling pathways in addition to canonical Wnt antagonist or agonist functions.  The results suggest that these proteins are major regulators of the immune response to tumors.  Thus far DKK1 is also a potent driver of type 2 immune responses. 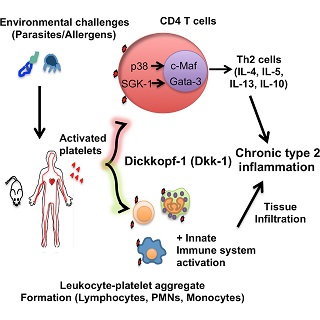 The role of Wnt antagonist Dickkopf-1 in immune responses is unknown. Bothwell and colleagues find that the elevation of Dkk-1 from platelets is critical to promote chronic and pathological type 2 inflammation via enhancing Th2 cell differentiation and leukocyte-platelet aggregate formation. It is also very highly expressed in over 70K human solid tumors of all types in public databases (cbioportal.org). 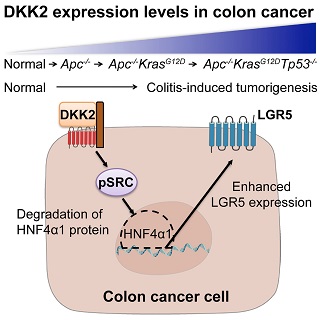 DKK2 is secreted by intestinal epithelial cells and the protein can stimulate transcription of DKK2 RNA.  Increased levels of DKK2 leads to activation of c-Src via Y-416 phosphorylation.  This then results in phosphorylation at 3 Y sites on HNF4a1 which then is degraded by the proteosome. Increased levels are observed of the stem cell marker Lgr5.

Analysis of metastatic mutant colonies in the liver suggest that there is an interaction with cancer stem cells/organoids that results in a physical interaction that resembles trogocytosis.  We hypothesize that this is a continuous process that can result in fused cells that can survive and form aggressive tumors some of which may metastasize.

The knockdown of DKK2 using a Crispr strategy in AKP organoids also significantly affects the development of a functional tumor microenvironment.  The intestinal epithelial cells show a deficit in Paneth cells by FACS, single cell RNAseq analysis and direct immunohistochemistry with antibodies for Lys1.  Further characterization of the tumor microenvironment is ongoing.

Collaboration with former PhD student A. Slanetz to treat patients with cell based therapies for Burkitt Lymphoma with expanded same patient CD8 T cells for subdominant T cell epitopes. In addition, neoepitopes for solid tumors will be defined using same patient PBMC and DNA sequence information to identify and then expand antigen specific T cells to test in same patient PDX mice and later for treatment of cancer patients.  Analysis of patient lymphocytes from samples from several additional clinical trials have been planned.

Parasitic infection by Leishmania is a well-known example of a chronic inflammatory disease. Upon infection/injury, leukocytes are recruited to the affected site, and further polarized. The activation of Wnt signaling is possibly one of the initial molecular responses to maintain tissue homeostasis and tissue repair. It is known that platelets are important players in these processes. Although chronic inflammation in parasitic infection is a consequence of constant interaction between the host immune system and parasites, how chronic immune responses are elicited and modulated by parasitic infection remains elusive. The important insight of this proposal is that platelets release significant amounts of the Wnt antagonist Dickkopf-1 (Dkk-1) following parasite recognition and such elevated levels of Dkk-1 regulate multiple levels of the immune response to support chronic inflammation. Consequently, this sequence of events favors parasite survival and constant immunopathology in the host. This systemic increase in Dkk-1 has potent effects on the immune system leading to the development of chronic TH2 immune responses and a potentiation of IL-10. Importantly, CD4 T cells developing under TH1 conditions were driven towards a TH2 (IL-4, IL-13, IL-10) phenotype in the presence of Dkk-1. We propose two aims to examine the interplay between platelets/Dkk-1 at several pivotal points of Leishmania-host innate and adaptive immune responses. In the first aim, the mechanisms by which Dkk-1 is released from platelets will be addressed. As activation is TLR2 dependent, Leishmania mutants that lack characterized surface virulence factors will be utilized. Given the known importance of PMN leukocytes (neutrophils) in Leishmania infection, we will also address the mechanism by which Dkk-1 increases leukocyte-platelet aggregates (LPA) and recruits leukocytes to the infection site. The second aim will specifically probe the consequences of conditional deletion in CD4 T cells of LRP6, the receptor for Dkk-1, and c-Maf and in neutrophils deletion of the receptor for IL-10 and LRP6. The goal is to investigate the contribution of these factors in platelets, CD4 T cells and neutrophils in parasitic infection leading to disease susceptibility or a failure to elicit sterile immunity that results in persistent infection. Taken together, this proposal will provide novel biological insight towards understanding parasitic recognition and evasion during infection and consequent pathogenesis. Our proposal has a primary focus on investigating the mechanism by which overexuberant immune responses are elicited and maintained by host-pathogen interaction. Since we propose multifaceted role(s) of platelet-derived Dkk-1 in modulating immune responses, our study will identify important roles of platelets in leishmaniasis, and contribute to developing Dkk-1 and related biological pathways as effective therapeutic targets in leishmaniasis and potentially other infectious diseases.