The innate immune system uses a limited number of germ-line encoded pattern-recognition receptors (PRRs, see Figure) that detect microbes via conserved pathogen-associated patterns (PAMPs). PRR engagement is critical for the induction of innate immune responses. However, many PRRs also induce the production of proinflammatory cytokines and co-stimulatory molecules that are necessary for the initiation of adaptive immune responses. PRR activation is therefore a central regulatory checkpoint for the generation of adaptive immunity.

The past years have been characterized by an increased understanding of the features that govern the innate instruction of adaptive immunity. The major classes of PRRs, their associated ligands, and the key signaling pathways are now known. In addition, it has become evident that PRR-induced cytokines orchestrate the adaptive immune response on multiple levels. For example, one major point of regulation affects the control of CD4+ T cells responses by regulatory CD4+ T cells (Tregs). Tregs control CD4+ T cell responses by suppressing the activation of potentially auto-reactive CD4+ T cells, thereby preventing the development of autoimmunity. The activation of PRRs in antigen-presenting cells leads to the release of IL-1 and IL-6, which then act on cognate CD4+ T cells. This event allows only microbe-specific CD4+ T cells to escape Treg-mediated suppression whereas auto-reactive CD4+ T cells remain sensitive to Treg-mediated suppression, as they are not exposed to IL-1 and IL-6. As this example shows, PRR activation is important to identify the microbial origin of the antigen and makes the antigen immunogenic. 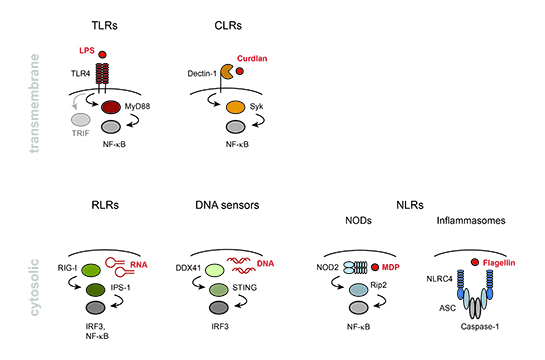 Despite the progress in our understanding of the innate regulation of adaptive immunity, the characteristics that define protective adaptive immune responses and distinguish them from seemingly similar response that does not protect from (re-) infection are not yet understood. Subunit vaccines comprising microbial antigens and PAMPs can induce antibody-mediated immunity that prevents from infection in cases were neutralizing antibodies are sufficient. However, it has become clear that the mere provision of an immunogenic antigen by subunit vaccines is very ineffective in the induction of protective cellular immunity. Vaccination with live attenuated strains is therefore still considered the best way to elicit effective long-lasting cellular and humoral immunity. Aside from antigen specificity and effector class, many features that define protective immune responses remain unknown. However, it can be assumed that many of these features are instructed by the innate immune system. Indeed, the innate immune system not only senses the physical presence of microbes via PAMPs but also monitors molecules that signal microbial cell viability, replication, or virulence. It is therefore likely that immunizations are only incomplete mimics of the inflammatory conditions present in live infections.

In the Schenten lab, we are interested in the cellular and molecular mechanisms by which the innate immune system controls and shapes adaptive immune responses. In this larger context, our projects target three specific areas: We aim to dissect the role of PRR-induced signals in the regulations of CD4 T cell responses to live infections and immunizations with dead microbes. We also investigate the role of cytosolic PRRs in the regulation of adaptive immunity to viral infections. The overall goal of our research is to understand the rules of engagement that define particular types of adaptive immune responses and to identify the innate immune signals that are required to induce protective immune responses to infections. Despite considerable interest in vaccination and vaccine design, the signals necessary to induce protective immunity are currently poorly understood. The identification of such signals will be of great importance for the development of novel vaccine strategies and new therapeutic approaches for the treatment of autoimmune and malignant diseases.